needed to sustain Australia's resource base

Water is essential for human existence, indeed for life’s beginning.  The circulation of water and other fluids lubricates the deep-seated dynamics that keep Earth geologically alive, and its surface habitable.  Several oceans worth of water may be present inside Earth, and the exchange of water and other fluids between the surface and the deep interior plays a crucial role in most Earth systems, including the evolution of the surface, the hydrosphere, the atmosphere, the biosphere, and the development of giant ore deposits.

Subduction - the descent of oceanic plates into the mantle - carries water down into Earth’s interior; dehydration of the subducting crustal slabs at high pressure and temperature releases these fluids into the mantle, causing melting and controlling the strength, viscosity, melting temperature and density of rocks in the deep Earth, as well as the structure of major seismic discontinuities at 410 and 660 km depth.  The partial return of some of these materials to the surface through mantle-plume activity provides a mechanism for tectonic cyclicity, which may have varied over geological time.  These effects dominate solid-Earth dynamics and make plate tectonics possible, but the origin, abundance, speciation and movements of fluids in the deep interior are largely unknown, and represent key issues in modern geoscience.

Until recently, a real understanding of the workings of Earth’s deep plumbing system has been tantalisingly out of our reach.  Now, rapid advances in geophysics are producing stunning new images of variations in physical properties such as seismic velocity and electrical conductivity in the deep Earth, but interpretation of these images in terms of processes and Earth’s evolution is only in its developmental stages.  It requires new kinds of data on deep-Earth materials, and especially on the effects of deep fluids and their circulation.

To provide the knowledge needed to reach a new level of understanding of Earth’s evolution, dynamics and fluid cycle(s) through time, CCFS will integrate information across geology, tectonics, experimental and analytical geochemistry, petrophysics, geophysics, and petrophysical and dynamical modelling.  These disciplines have traditionally represented “research silos”, but we will bring them together to provide a significant increase in our national research capability.

In order to track the input of coalescing strands, the concept of programs contributing to understanding Earth Architecture and/or Fluid Fluxes helps track the pieces of the giant 4-dimensional Earth puzzle being solved by CCFS and encapsulates the relationship of all the CCFS programs to Earth “fluids”.


“Architecture” is the roadmap for fluids

All Research highlights and Projects are now keyed to this framework shown diagrammatically below: 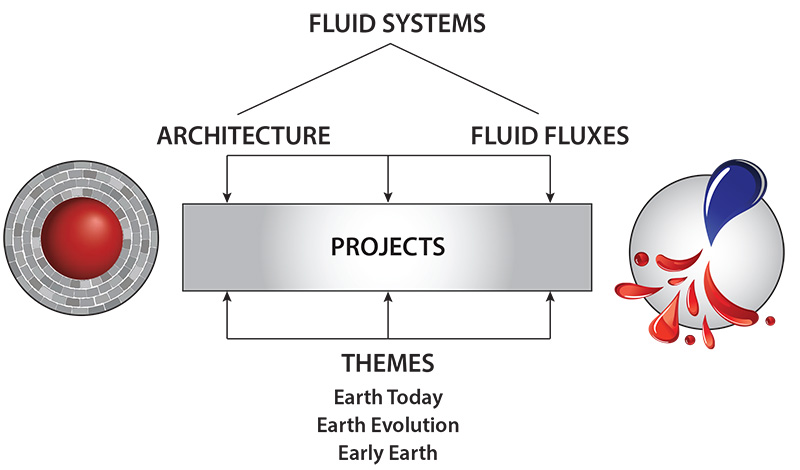 A successful and productive CCFS Research Meeting was held on 3-4 July 2014.  The meeting provided the opportunity for participants, as well as members of the CCFS Board, to hear research presentations from CCFS researchers, including postgraduates and ECRs.

This forum is a catalyst for new, exciting ideas and cements collaboration among researchers of the Centre’s nodes and partner institutions.

The meeting also provided an opportune time for a CCFS Board Meeting. 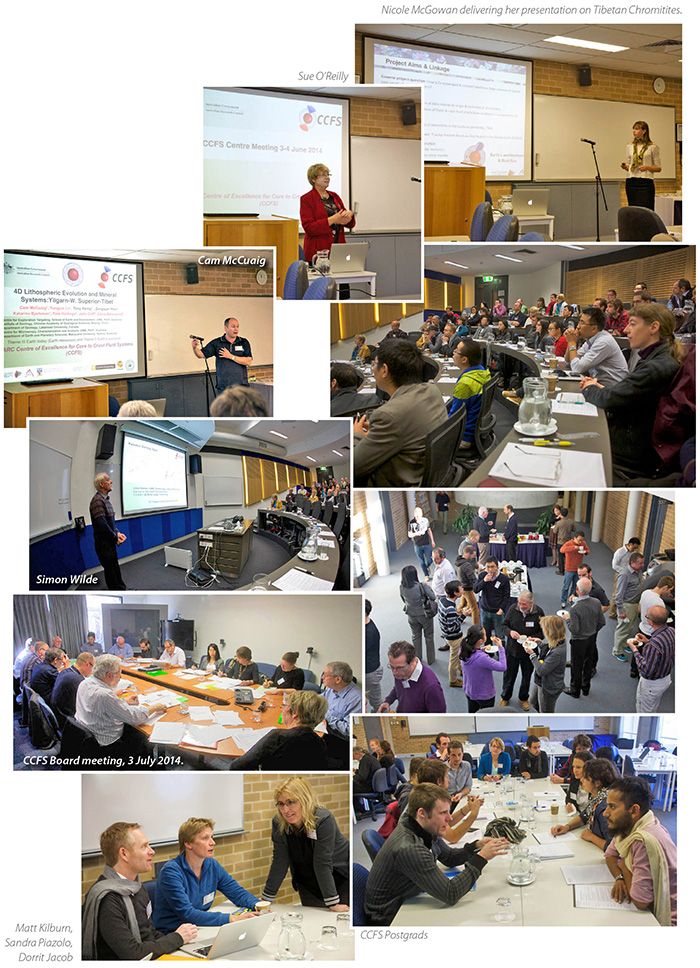 The Early Earth - Its formation and fluid budget.  This theme focuses on the nature of Earth’s early differentiation and the role of fluids.  Ancient (>3 Ga) rocks may yield evidence for early life, and analysing the mass-independent fractionation of Fe and S isotopes will allow us to test the involvement of biological processes in ancient deposits.

The earliest record of Earth’s magnetic field will provide new information on when the core’s geodynamo formed and the geometry and intensity of its field, and will be used to track the movement of Archean tectonic plates.  The geochemical nature and dynamic behaviour of the mantle in the early Earth will be assessed using in situ analysis of targeted minerals from a variety of mantle rock types and tectonic environments, coupled with dynamic modelling.

Earth’s Evolution - Fluids in crustal and mantle tectonics; recycling of fluids into the deep mantle; hydrosphere, atmosphere and the deep Earth.  Earth has evolved through cycles of crustal formation and destruction, punctuated by “tipping points”, when rapid cascades of interlinked events produced dramatic changes in the composition of the oceans, the oxygen levels of the atmosphere, the tectonic behaviour of the crust and mantle, and the distribution of mineral and energy resources.  These events changed the distribution and behaviour of fluids in the deep Earth, and each altered Earth’s evolution irreversibly.

Key issues are:  when did subduction start; how did it contribute to the Earth’s cooling; how has this process evolved through time?  Isotopic studies will define the rates of continental growth vs recycling through time, and test linkages between crust and mantle events.

Geophysical imaging and dynamic modelling will be used to build 3D models of subduction dynamics, thermal evolution and geodynamic cycles.  Stable-isotope studies will track water and other fluids in their cycles through the Earth and the hydrosphere.

Earth Today - Dynamics, decoding geophysical imaging, and Earth resources.  Geophysical imagery gives us a snapshot of the current status of the deep Earth but also carries the imprints of past processes.  Realistic interpretation of these data will give us new insights into Earth’s internal dynamics and will have practical consequences, e.g. for resource exploration.  We will develop thermodynamically and physically self-consistent dynamic codes to model complex processes and their expression in geophysical and geochemical observables.  These codes will be used to identify the processes that have controlled the fluid cycle through Earth’s history.

Measurement of the physical properties of potential deep Earth materials at extreme conditions will feed into petrophysical modelling of seismic data in terms of composition, temperature and anisotropy.  Measurements of metal complexing at realistic conditions that mimic real ore-system fluids/melts will provide new ways to interpret observations on fluid/melt inclusions in minerals.  We will investigate the role of organo-metallic compounds in metal transport, using the capabilities of the Australian Synchrotron, to understand the role of such compounds in the formation of large mineral systems.